Paphos was founded at the end of the 4th century bc by the last king of palaipaphos, Nicocles. When Cyprus came under the ptolemies the city emerged as an important administrative and economic centre.
After the annexation of the island by the romans, in 58 bc, nea paphos remained its capital until the fourth century ad, when the romans transferred the seat of their administration to salamis. Remains from the roman period include luxurious villas with superb mosaic floors, the most beautiful of all mosaics found on the island. After a brief history of nea paphos from the end of the 4th century to the ottoman period, the guide provides detailed descriptions of the house of dionysus, the house of orpheus, the villa of theseus and the house of aion. Also included are an analysis of the mosaics and a brief account of the excavations conducted on the site. Mosaics in their entirety are inscribed in the unesco world heritage list.

De gids is in uitstekende staat 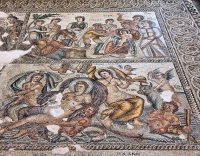